The frontman for The Beveridge Brothers, one of West Michigan most popular bands in the 1970s and 1980s, died Thursday morning. See what people are saying about this well-known musician.

The Beveridge Brothers
are one of those bands that qualifies as an institution in Grand
Rapids’ rock history, firing up and packing venues such as The Shamrock,
Eastown Saloon, Danny J’s, Bavarian Inn, Russo’s and others during the
group’s heyday in the 1970s.

Now, this “hard-hitting, boot-stomping Southern rock” band – as it
once was described by local musician Mark Swanson – has lost its
much-beloved frontman, Hal Beveridge.

In the Band’s Heyday: Hal Beveridge

His son, Jessie, lead singer for popular Grand Rapids rock band The Rockit King,
eulogized his father on Facebook by writing: “You were so incredibly
kind to me. I love you and wish I could talk to you one more time.” He
added that there will be plans to “throw a party and play some music,”
with funeral arrangements still pending.

Guitarist and bassist Jim Shaneberger, who played
with Beveridge for about two years, told Local Spins that Beveridge was
“a real, genuine guy. He was always so nice. He was a true Grand Rapids
legend and I’m grateful for the experience being bandmates. I’ll miss
him.”

The Beveridge Brothers attracted huge crowds for their performances
across West Michigan in the 1970s and 1980s, and the band reunited in
2008 after Hal Beveridge spent a couple of stints in prison on a
cocaine-related charge and parole violation.

Beveridge told reporter John Sinkevics for a
2008 Grand Rapids Press story that he continued to play and write music
while incarcerated, and he fondly recalled The Beveridge Brothers’
immense popularity.

“We were really real,” the bassist said. “We had a lot of followers, a
lot of bikers … plus factory workers. We always had a big crowd and
that made the club owners happy.”

Fans and fellow musicians quickly flooded Facebook with posts about Beveridge and his impact on West Michigan’s music scene:

Lou Musa (The Verve Pipe): “Had the privilege to jam
with Hal Beveridge many times and each time he kept me on my toes. He
was an amazing bass player and one of those guys that played better the
more he partied. His road stories were incredible, too.”

Jerry Davis (The Beveridge Brothers): “It was an
honor for me to be in the original band with him and the brothers. We
played for years together and created a lot of these road stories
together. I’m so sad and broken-hearted.”

Fred DeVries: “Lessons
taught to me by my friend Hal Beveridge: ‘Just do the gig.’ Hal always
did the gig. Love and light to all the Beveridge Brothers family of
relatives, friends, musicians and blues fans. Everybody learned
something from Hal.”

April Thorsten Hubert: “Hal was such a kind and
loving person! He always had the biggest hugs waiting for anyone. He
will be missed. I love you friend.”

Theresa Beveridge: “Hal’s life was unconventional,
but he lived life to the fullest, always seeing the glass as half-full.
His attitude never changed.”

Brian Morgan: “Hal was an amazing musician as well
as an amazing friend to myself and so many musicians. A true icon and
cheers to everyone that had a chance to share the stage with Hal.”

Jake Gerard: “I’m chasin’
my dream in Nashville. Truly wouldn’t have happened without Hal. He was
definitely one-of-a-kind. There’s a million hilarious stories about him.
He was good to me and I’ll never forget him.”

Denny Larsen: “I’ll miss sitting in with him; he was so gracious with sharing the stage. Playing lead, I usually play 12 bars but with Hal he’d scream do it again which helped bring out more out of my playing. Meeting in the ’70s and since — always cheerful and a kind person. He will be missed.”

For the latest music news join our email list 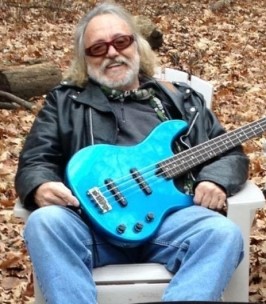 Harold Guy Beveridge Jr., 72, passed away unexpectedly Thursday, December 6, 2018 in Grand Rapids, MI. Hal was born in Coudersport, PA, December 3, 1946 and was preceded in death by his father, Harold Sr., stepfather, Stan Drury and aunt, Debra Danavage-Routsaw. He is survived by his mother, Dorothy (Danavage) Beveridge-Drury; his aunt, Dolores Danavage; his brothers, Tony (Terri) and Harry (Patricia); his children, Feather, Jessie (Kara), Desiree, Justin, Colton and Salina; his grandchildren, Audrey (Stephen), Nolan, Tex, Stella and Max; his great-grandchildren, Adrionna, Alexis, Maddox, Monroe and Jack; his nieces, Alissa and Lisa; his nephews, Kenny, Aaron and Hunter and his great-niece, Kaylee. Hal was a Veteran, a furniture finisher, an LPN and most notably a Musician, enjoying regional success as the leader of the longstanding Beveridge Bros. Band, also serving as bassist for both Ronnie Fray and Clarence “Gatemouth” Brown. Family, friends and the general public are invited to celebrate Hal’s life on Saturday, January 12, 2019 from 3-7pm at Eastern Ave Hall, 506 Eastern Ave NE, Grand Rapids, MI 49503. Fellow musicians are encouraged to bring their axes and jam. Prepare to eat, drink and be merry.

One Response to Hal Beveridge