The classically trained Grand Rapids singer has turned his devotion to the music of a legendary rock artist into an ambitious, fully orchestrated stage production. (Video, podcast)

Grand Rapids singer Mark Vanden Berge likes to use that expression to describe his penchant for crooning a bit like the legendary Van Morrison: Like Morrison, Vanden Berge is a stocky tenor who can cover a broad range of styles.

That training, Vanden Berge says, has given him the breath control to perform the blue-eyed soul songs of a “technical singer” like Northern Ireland’s Morrison, a Rock and Roll Hall of Fame inductee known for the hits “Brown Eyed Girl,” “Tupelo Honey,” “Wild Night” and “Domino.”

But it’s Vanden Berge’s intense love of Morrison’s diverse music – ranging from R&B to pop to jazz to rock to blues – that’s really driven the singer to create an ambitious production paying tribute to the iconic singer who has more than 700 tunes in his catalog.

Official Sponsor of the Spins on Music Artist Spotlight

Backed by a full orchestra and a rock band (Creolization), Vanden Berge unleashed his first Van Morrison tribute show at St. Cecilia Music Center in 2011 and will present this production again on Friday at Forest Hills Fine Arts Center in a benefit for Habitat for Humanity of Kent County.

On Wednesday, Vanden Berge previewed that concert with an impressive in-studio performance of the Morrison classic, “Moondance,” backed by pianist Mark Kahny and saxophonist/flutist Ed Clifford during Local Spins Live on News Talk 1340 AM (WJRW). You can listen to a podcast of the entire show here, and watch a video of that performance at the bottom of this post. 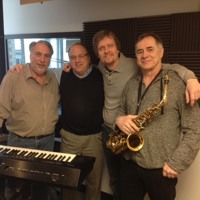 While he may resemble Morrison in some ways, Vanden Berge stresses that he’s not trying to perfectly “imitate or mimic” the superstar singer’s voice, but rather pay tribute to his music with lush orchestral and choral backing.

Vanden Berge, who has seen Morrison perform live, says much of Morrison’s music is well-suited to symphonic arrangements. That led him to discuss the idea of a tribute show with Creolization’s Dave Molinari and ask Clifford, a member of the Grand Rapids Symphony, to write an orchestral score for Morrison’s music.

Eventually, Vanden Berge – who sells commercial LED lighting by day – says he’d love to perform the tribute show with orchestras around the country and already has contacted many in Michigan about booking the production. His research shows there are few Van Morrison tribute acts, with none arranged for orchestral performances.

The Van Morrison Experience: On stage at St. Cecilia Music Center in 2011.

There’s a real “community-type feel” and spiritual dimension to Morrison’s music, he notes, appealing to a broad range of ages and ethnic groups.

“I was just blown away and loved it,” he recalls, taking note of the diverse audience of “all races, creeds backgrounds” at the concert. “The elements fit perfectly with Habitat.”

Ogland-Hand says the nonprofit group that creates housing for low-income families wanted “to do something special” to commemorate its 30th Anniversary Build event, which raises money to restore a house in the Wealthy Heights neighborhood of Grand Rapids.

And special it promises to be: Vanden Berge says as many as 100 musicians and singers will be on stage during Friday night’s concert, with a choral group and musicians from Grand Rapids’ Hark Up along with Creolization involved in the production. The songs will cover the gamut of Morrison’s career, “showing a journey, old and new.”

The concert begins at 7:30 p.m. Friday at Forest Hills Fine Arts Center, 600 Forest Hill Ave. SE, with doors opening at 6:30 p.m. Tickets are $40 and available online at the habitatkent30.com website or by stopping by Habitat for Humanity’s offices at 425 Pleasant Ave. SW. (Eighty percent of the ticket price is deductible as a donation.)

If any tickets remain, they’ll be available at the door on Friday night. Spartan Stores, the event’s presenting sponsor, will provide dessert and refreshments after the show.