A League of Her Own

In her book, Swing Shift: All-Girl Bands of the 1940s, author Sherrie Tucker documents the largely forgotten history of women musicians and their contributions to the big band era. She notes that during WWII, when men were serving overseas, “swing skyrocketed with the onslaught of war.” The book is filled with firsthand accounts of remarkable women playing in all-female jazz and dance bands all across America.

Here in Worcester, one such band was Maxine King and her Starlets, an all-girl territory band that barnstormed throughout New England in nightclubs, dance halls, and ballrooms. At its peak, the group had as many as 13 members and by most accounts could really swing. 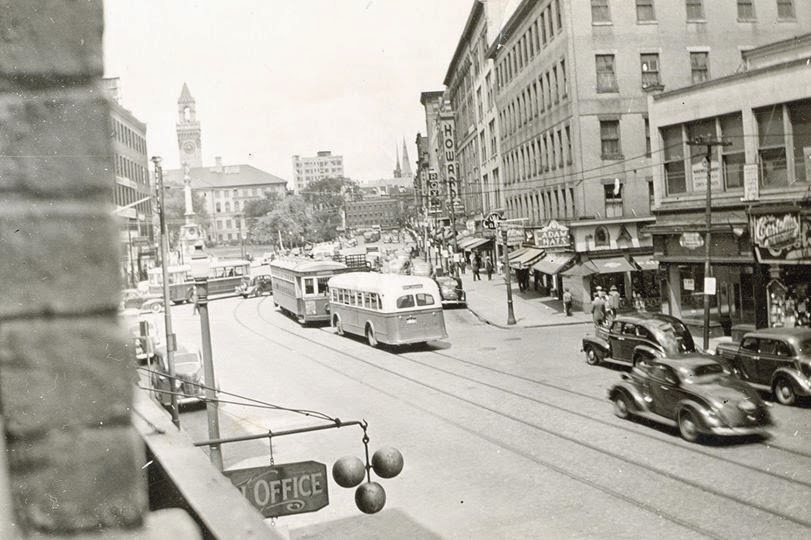 King was a gifted pianist and organist who was born in Worcester on October 5, 1922. Her family name was George. Her real name was Sadie Ferris George. There is no known origin of the name change to the more Americanized “King.” The guess is that it was fashioned after one of the Andrew Sisters (Maxine) and the King Sisters. She grew up in a traditional Lebanese home and practiced her faith at St. George Orthodox Church. She first lived at 31 Wall Street, in the same neighborhood of local trumpeter Emil Haddad.

In fact, according to Maxine’s younger sister Dolores, Haddad was first taught how to play the trumpet by Michael George, one her older brothers. Emil was 13 when he first started playing. 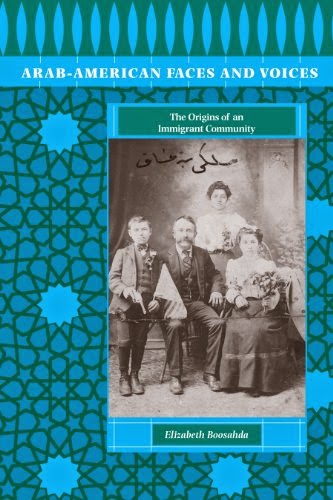 Author Elizabeth Boosahda, who is a cousin to the George family, wrote about Maxine and those early days in her landmark book, Arab-American Faces and Voice; The Origins of an Immigrant Community. “Around 1939 and 1940, when she was just out of high school, she had practice sessions with Emil Haddad on the trumpet, Richard Haddad on the saxophone, and her brother Michael on the trumpet at their homes or at an empty store owned by Emil Haddad’s parents. They did gigs together.”

The adcopy for the book reads: Boosahda focuses on the Arab-American community in Worcester, Massachusetts, a major northeastern center for Arab immigration, and Worcester’s links to and similarities with Arab-American communities throughout North and South America. Using the voices of Arab immigrants and their families, she explores their entire experience, from emigration at the turn of the twentieth century to the present-day lives of their descendants. This rich documentation sheds light on many aspects of Arab-American life, including the Arab entrepreneurial motivation and success, family life, education, religious and community organizations, and the role of women in initiating immigration and the economic success they achieved.” It was published by University of Texas Press, 2003.

Boosahda also noted that Maxine King’s all-girl orchestra played gigs not only in New England, but all the way into New York, and at military bases. “Her four brothers were in the U.S. military and enjoyed the orchestra’s music.”

Before taking up the trumpet, Haddad was already an entertainer by the age of 10. He and Al Dahrooge – also a neighbor and cousin of the George family – formed a comedy act and for a period of time appeared every Saturday morning over radio WTAG.

In addition to both being Lebanese, Maxine and Emil were the same age. As teenagers they went to Commerce High School, which at the time had an outstanding music department, boasting two large orchestras and concert bands, choruses, and glee clubs.

Maxine was the fifth of eight children of Thomas and Sophie George, both originally from Lebanon. “My father got up every morning at 4 o’clock to chant and pray,” says Dolores. “We all sang in church. Maxine was the organist.”

By the 1930s the George family moved to Hamilton Street, where Dolores still resides. She says Maxine was earning money for the family by playing music at an early age. “She was a special person. Maxine had perfect pitch. My mother made it a point to see our teachers once a week and one of them said to my mother, ‘Your daughter has musical talent.’ She recommended her getting private tutoring. I still remember her teacher. Her name was Marie Louise Webetts. She was a real Blue Blood American. She lived up near Fairlawn Hospital.  Lessons were $25 a week. That was a lot of money back then.” 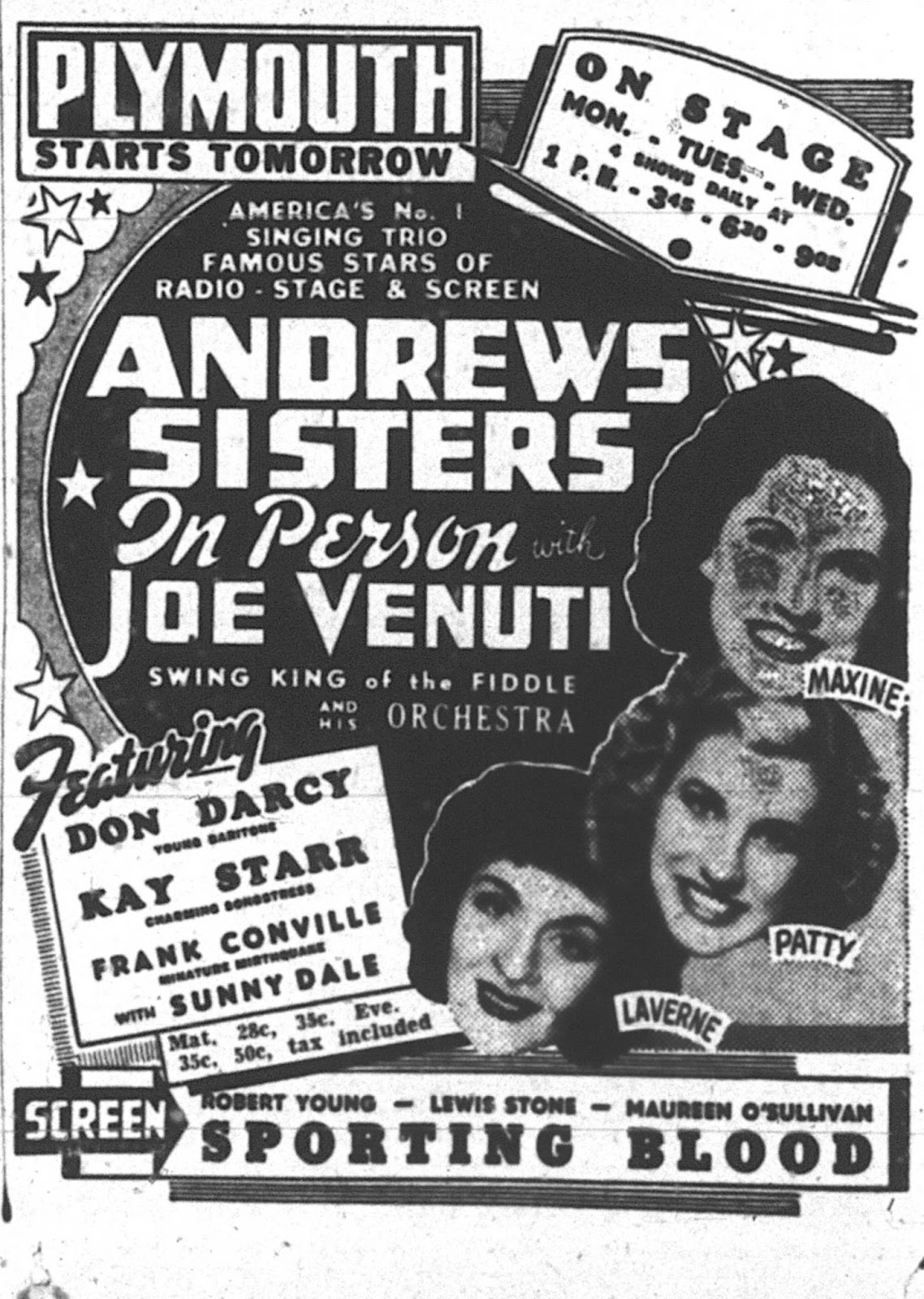 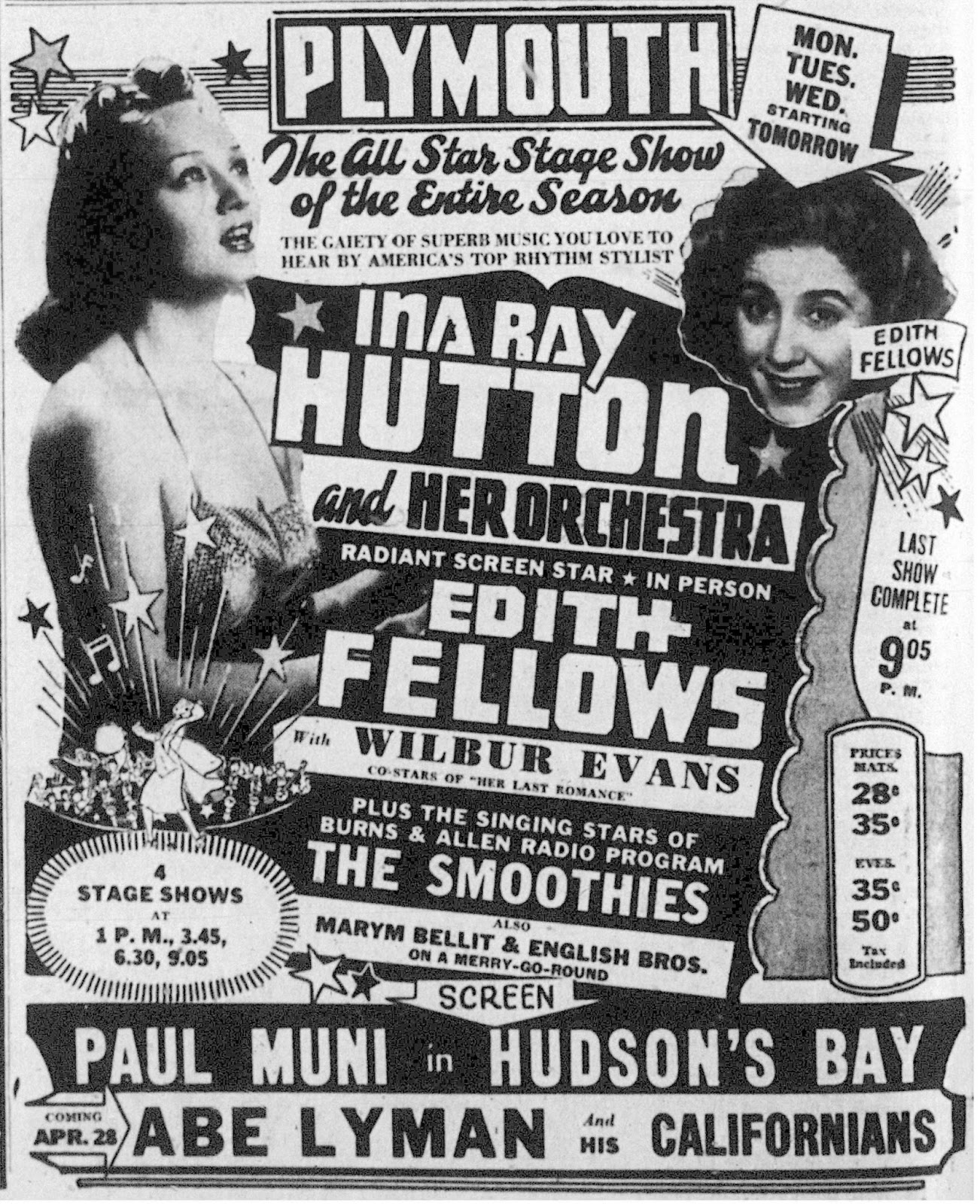 Before putting the all-girl band together, Dolores says Maxine worked general business musical jobs all over the city. In particular, she recalled her sister playing at Putnam and Thurston’s Restaurant on Norwich Street. She also worked at the Eden Gardens, Hotel Coronado, the Bancoft Hotel, and at one point, Maxine was the house pianist at the Plymouth Theater. 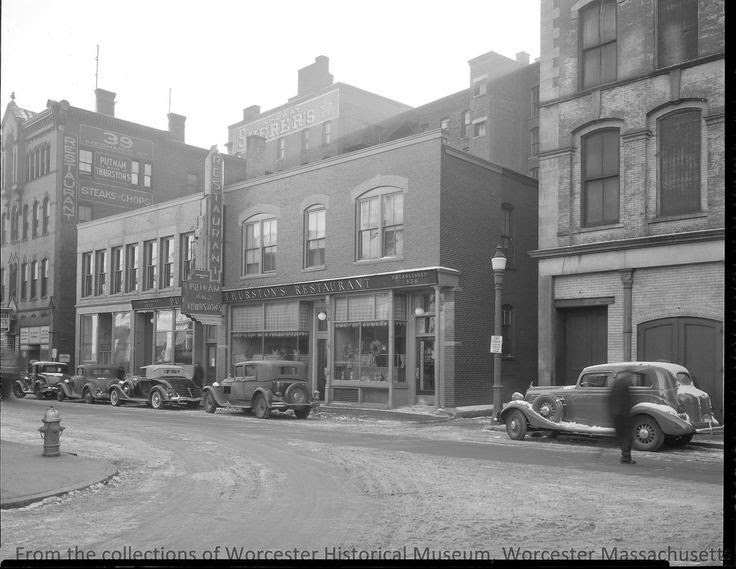 Maxine died on July 17, 2006 and according to her obituary in the Worcester Telegram, she played between showings of movies and newsreels at the Plymouth when she was 12 years-old. “She later played with such well-known groups as Spike Jones, Woody Herman, Tommy Dorsey, Horace Heidt and singers: Vic Damone, Dick Haymes, and the Ink Spots.”

“She was invited to join Spike Jones, but my parents said, no because while at home she was required to sleep in her own bed every night,” says Dolores. “I remember she had an agent. She also studied in Boston.”

Unfortunately, very little is known or documented of the all-girl band. In 1945, Telegram entertainment writer James Lee made mention of them in his column, Backstage: “Under the marquee: Maxine and her Starlets, all-girl Worcester orchestra, play a repeat date Sunday at the Merry-Go-Round, Hoosick Falls, NY, nightclub.”

The trumpeter in the group was Jane Krasuki, an accomplished musician who held a “gold card” with Worcester’s Musicians Union Local 143. She was later a member of a trio called the Rhythmettes.

Dolores, who was born in 1939, was little too young to remember the band, but she says, “I have a 78 of the band somewhere. I remember them travelling. They played in western, MA at a place called the Bernardston Inn.” 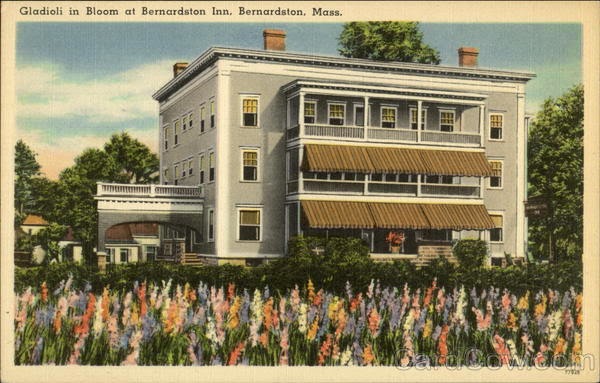 The March 12th 1949 edition Billboard magazine mentioned Maxine. An item, with the headline of “Organ Jamboree Big at Dolan Skateland” read: “Worcester, Mass, March 5 – An organ jamboree held February 28 at James J. Dolan Skateland here was reported a big success by Mrs. Norman Allen, wife of the Skateland organist. Five organists, including Allen, were featured. Ira Bates, Boston; Joe Nickerson, the Sheraton Hotel, Boston; Ron Harry, Fitchburg, Mass., and Maxine George, Worcester, Mass., appeared on the program. To the skater selling the most tickets to the affair went an album containing an autograph record of each organist. Skating was offered the first half of the evening, with ballroom dancing following. Organ novelties were offered between sessions.” 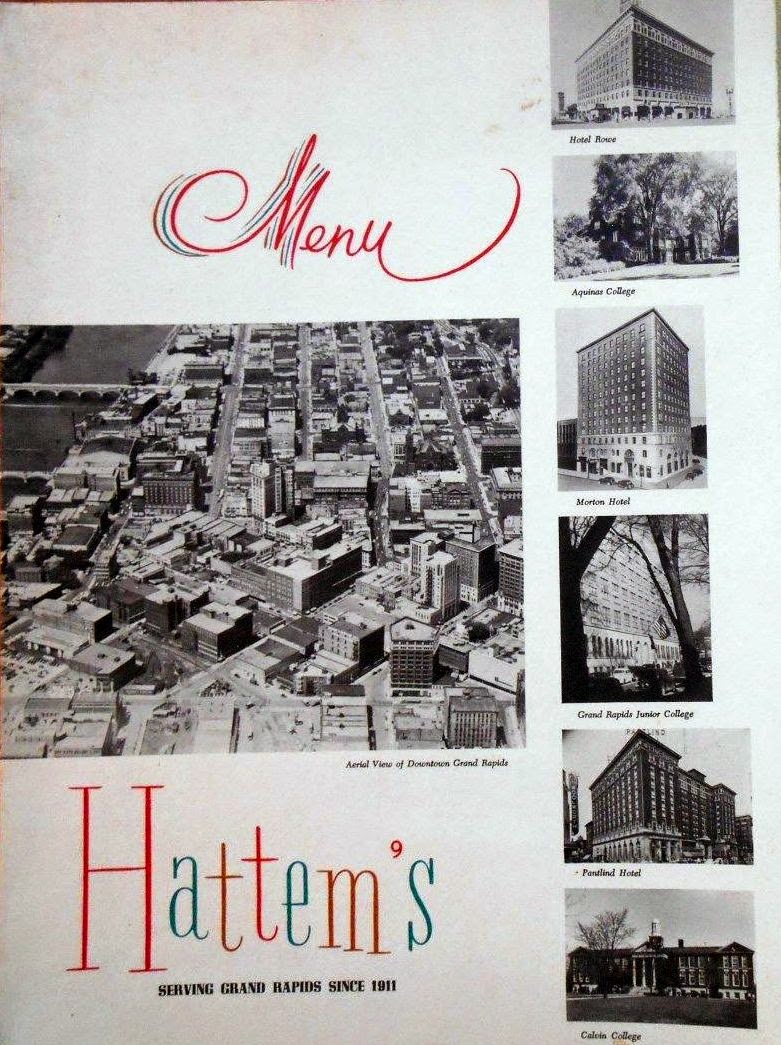 In 1948, Maxine played a church convention in Grand Rapids, MI and met her future husband Moses Hattem, who owned a prominent dining establishment in that city. She left Worcester in 1950, settling in Grand Rapids where she became a well-known pianist and organist for more than 50 years. She first came to prominence there after performing at Hattem’s Restaurant.

Grand Rapids is comparable to Worcester. A 2010 census counted its population as a city of 188,000 people and is the second to Detroit as the largest city in Michigan. Maxine and Moses had four children. A daughter, Donna still lives in Grand Rapids. “My mother was very talented. She had a great ear. She could play any song in any key. She played in the family restaurant and elsewhere, everywhere, really. And, she taught. She recorded one album. It is called Music by Maxine.” 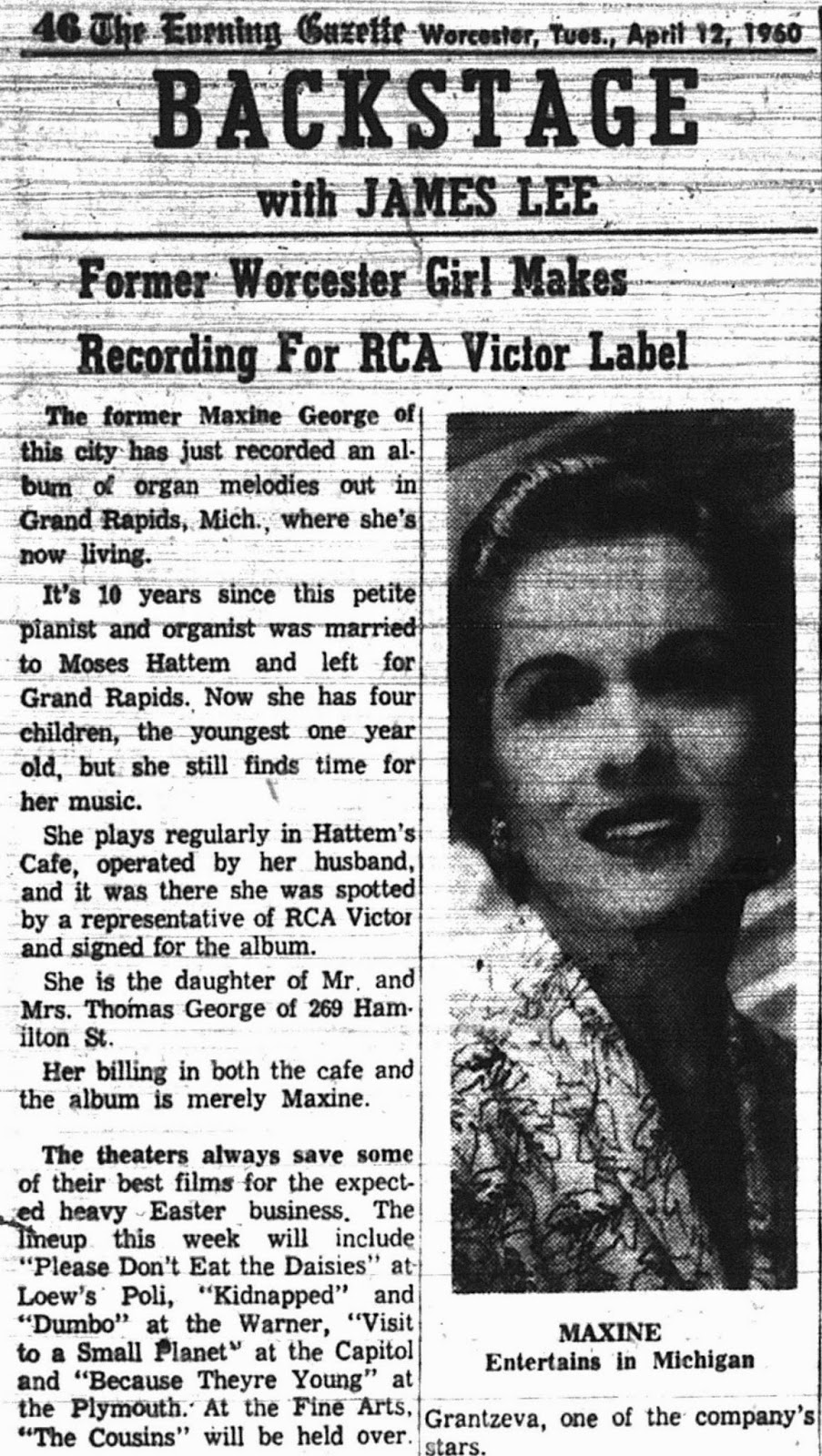 At the restaurant Maxine played for many dignitaries, including Betty and Gerald Ford, who were so enamored of the pianist that they invited her to the White House as their guest. According to her Grand Rapids Press obituary, “she was the pianist at the weekly Grand Rapids Lions Club meetings, Cascade Hills Country Club, and many local retirement communities. Maxine was the organist and member of St. Nicholas Antiochian Orthodox Church.” Aquinas College has established the “Maxine G. Hattem Memorial Music Scholarship” for students pursuing a major in music with a preference in piano and organ.”

Note: This is a work in progress. Comments, corrections, and suggestions are always welcome at: chromatic@charter.net. Also see: www.worcestersongs.blogspot.com. Thank you.

Posted by Chet Williamson at 5:36 PM

One Response to Maxine