“[organissimo] is thoughtful without being too earnest; danceable, but never repetitive.”
~ Downbeat

“…stretches the boundaries of the traditional organ trio with bits of funk, blues, Latin, groove, and New Orleans influences.”
~ Jazzweek

” But what I like best about the band are the one-for-all mentality and the attention to details of dynamics, pacing and groove. These guys will put a smile on your face and keep it there.”
~ Detroit Free Press

“one of the most promising organ trios in jazz. ”
~ Chicago Tribune

” organissimo is not your garden variety, grandfather’s organ combo.”
~ All Music Guide

“Once these guys lock in, a crowbar is needed to disengage them. The vibe is magnetic.”
~ jazz.com

QUICK BIO: You might take notice of something at an organissimo performance. The audience isn’t the typical homogenous “jazz” audience. You’ll see a healthy mix of people from all walks of life; young and old, black and white, from hippies to corporate professionals and everything in between. organissimo’s music skirts over fences and satisfies a diverse range of tastes. You’re as likely to see people dancing as a group of folks intently listening.

As American cultural critic Elvis Mitchell wrote after witnessing a show at Baker’s Keyboard Lounge, “The group’s toned, muscular playing keeps the crowd rapt, a condition noticeable by the fact that almost no one is talking.”

organissimo formed in November of 2000 with the goal of bringing new, original music to the organ trio format. Guitarist Joe Gloss and organist Jim Alfredson met at Michigan State University in the late 90s, and the two quickly recognized a rare musical chemistry. They searched for a complimentary drummer and Randy Marsh fit the puzzle perfectly. In 2010, Detroit guitarist Ralph Tope joined the band after Joe’s departure.

The focus of organissimo is still on original material and extending the tradition of the classic organ-based trio. organissimo’s sound is instantly identifiable yet constantly evolving, infusing elements of funk, gospel, blues, progressive rock, and Latin rhythms into a solid foundation of jazz. Shifting meters, deep grooves, melodic finesse and tight ensemble interplay are hallmarks of the organissimo sound.

organissimo’s music has received numerous local and national awards. organissimo’s album, Groovadelphia, topped the CMJ Jazz Charts for three weeks at #1 and stayed in the JazzWeek Top 50 for 14 weeks, peaking at #22. It won two WYCE Jammie Awards for Best Jazz Album and Best Song and was also named one of the Best Releases of 2008 by WVPE, KJAZZ, CKCU-FM, and Jim Wilke’s Jazz After Hours program, syndicated on over 60 NPR stations nationwide. It is also nominated for a Detroit Music Award.

organissimo’s sophomore album, “This Is The Place“, hit #19 on the JazzWeek charts and a solid #4 on the CMJ charts. It also won two WYCE 2006 Jammie Awards for Best Jazz Album and Album of the Year , and was nominated for 2005 Detroit Music Award. Like its predecessor, it was named one of the Best Releases of 2005 by Jim Wilke ‘s Jazz After Hours program in Seattle, WHRV in Virginia Beach, WBEZ in Chicago, WVIA-FM in Pittston PA, WBLV Blue Lake Public Radio, WLNZ in Lansing, WEMU in Ann Arbor/Ypsilanti, KXJS in Sacramento, and WYCE in Grand Rapids, Jazz 90.1 in Rochester NY, Real Detroit Weekly Magazine , the Detroit MetroTimes and the Lansing City Pulse. NPR also featured the CD as a part of its Open Mic series.

The group also won a WYCE Jammy award for Best Jazz Album for their debut CD “Waiting For The Boogaloo Sisters…” (which features prominent New York saxophonist Ron Blake ). The CD was also named one of the Best Releases of 2003 by Jim Wilke’s Jazz After Hours program, syndicated on over 60 NPR stations nationwide.

organissimo continues to write and record with a new album due in late 2012.

Past Performances of note: 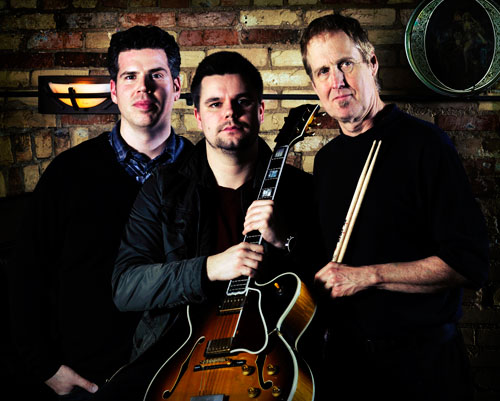