Mickey Holiday is a musical artist with a rich heritage.   Born in a Christian family with musical parents, grew up in Benton Harbor, Michigan , began to play in Bands around the Grand Rapids area, (Truetones, Metros, Dick Cole Trio).

In the 60’s he lit up the Jersey Shore singing with the Jaywalkers (Candy Cane, Dudley’s, Mrs Jay’s [Stone Pony], Groh’s, Steve Brody’s, Big Bill’s, Thunderbird, Colonel Cooper’s, Peppermint Lounge in NYC, etc.), working opposite groups like Johnny Maestro and the Crests, Levon and the Hawks who later became The Band, backing up Bob Dylan.
Also, Conway Twitty on his last rock ‘n’ roll gig at the legendary Tony Mart’s in Somers Point, New Jersey.  In Chicago at the Club Laurel.   Also, at the Whiskey a-go-go on Rush street and the Action a-go-go on the south side in the Bobby Dee band with Guitarist Harvey Mandel, Organist Barry Goldberg and Drummer Eddie Hoh.

Following his Conversion to Christ in 1967, he brought his singing and songwriting skills to the church.
John W. Peterson has said, “Those who have discovered the music of Mickey Holiday know it rings with the sincerity and conviction of a life fully dedicated to the Lord, and has the warmth that is born out of deep concern for those who have never tasted the grace of God.”

In 1968, the first of his gospel Songs was published and soon many others followed including: “I Know Where I’m Goin'”, “Who Killed Jesus?”, and “Christ Is The King Of All Kings”, just to to name a few.   His song “Happy Am I” has been immortalized in the Singspiration Hymnal “PRAISE” …an example of his talent and testimony.

Sometimes heritage can be interpreted by the modern church as a synonym for staleness.   Not so in the case of Mickey Holiday.   His album “POWERHOUSE” produced for Good Life Records is evidence of an ongoing, ever-increasing understanding of his Christian Faith.

In 1972 he began traveling across the United States, singing and sharing his faith, crossing denominational lines with a passion for the unity of the Body of Christ, as expressed in his album: “WE ARE ONE”.

Mickey Holiday is not simply a performer.   He writes, records, arranges, orchestrates, and shares the Word.   His personal blend of humor and worship has brought that special touch to many believers.

After coming off the road in 1997, Mickey worked with a group called God’s Country every Saturday night through 2004.

Currently, He continues in the ministry of praise & worship on the west coast of Florida with his new band, MICKEY HOLIDAY & COMPANY.With Mickey Holiday, you have years of Ministry and Music Production experience at your service.

Growing Up In
Benton Harbor, Michigan
(Click on any photo to see enlargement)
[ Back to Top ]
Return to 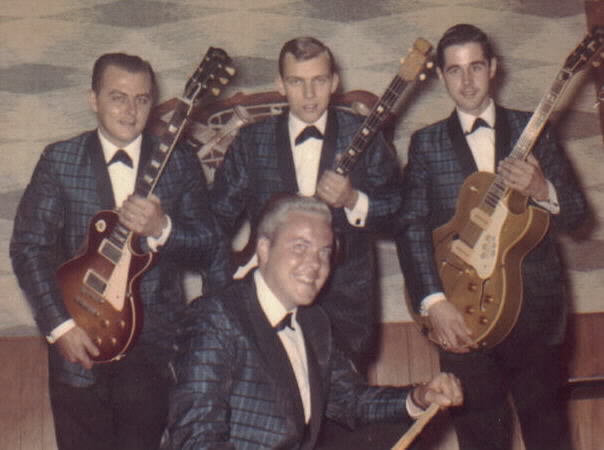 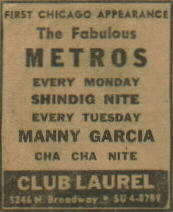 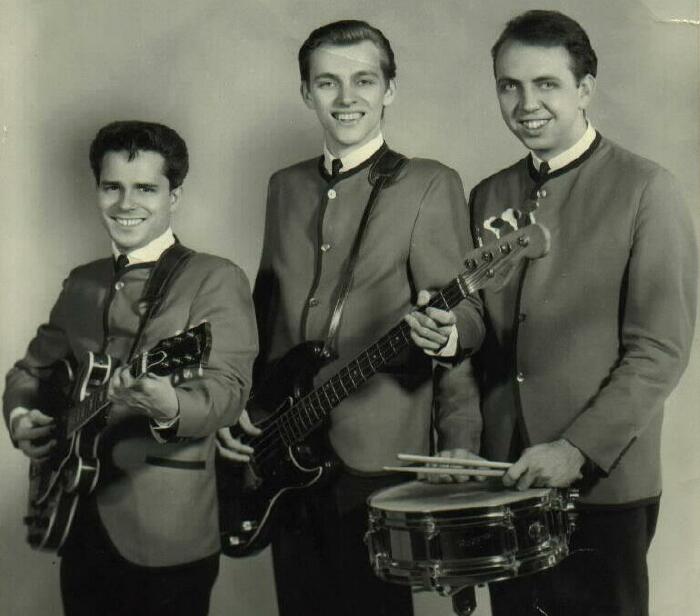 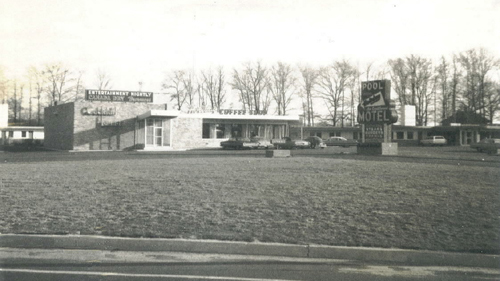 My First and Last Gig on Tenor Sax 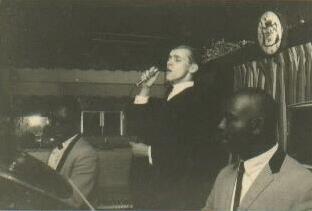 The early days at DUDLEY’S BY THE SEA in Belmar 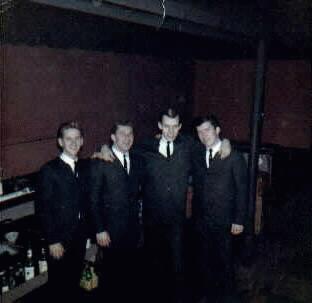 Our First Record On The Jukebox 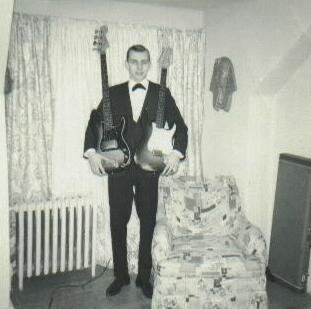 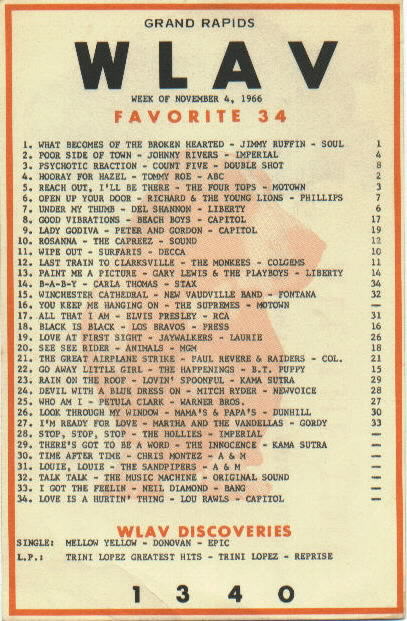 Thanks To Michael Jay – The #1 Deejay In Grand Rapids 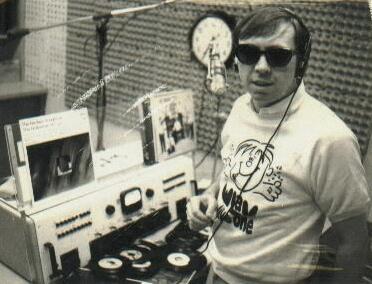 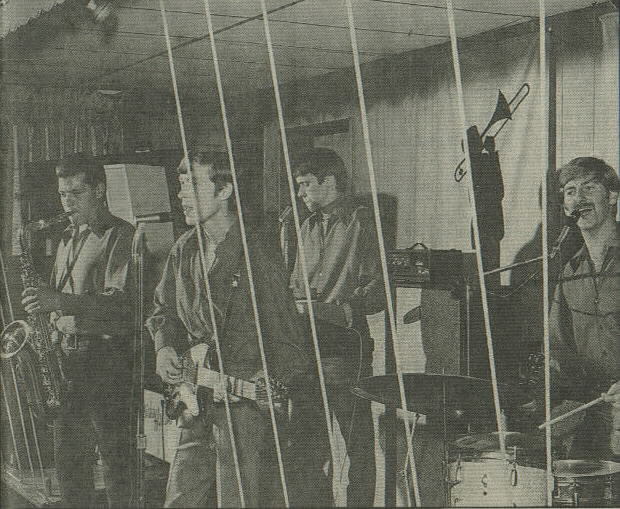 At the time of this picture I had already received the Lord Jesus Christ and was seeking His direction for my life.  Shortly after this we were playing at Groh’s in Belmar and I was singing “Georgia On My Mind”, a song I’d sung many times, for many years.   A verse in the song says: “Georgia, Georgia, No peace I find.”  At that moment God spoke to me, right on the bandstand of Groh’s, and said, “Why are you singing about that, when you ought to be singing about the peace that you’ve found.”   That night I told the band that I was quitting.

The problem was that we had a big engagement coming up in Grand Rapids, Michigan.  If I quit now that would hang everybody up and I didn’t want to do that but I didn’t want to hang God up either and I knew He wanted me to quit.  So I decided to make the Grand Rapids trip and then quit.  That decision made me very uneasy and I prayed all the way to Michigan.  Just outside of Grand Rapids a cloud began to form on the horizon in front of the van and out of it Jesus appeared to me, beckoning me with his hands to come closer.  I couldn’t stand it any longer.

When I arrived in Grand Rapids I called the Shamrock Lounge and told them I wasn’t coming to the gig.  They could come and get my equipment and use it but I wasn’t going to set foot in that place.  I knew I had to obey the Lord even though it meant letting my friends down.

It was at this time, David Heth was at the Shamrock to see the Jaywalkers, and when they discovered that he played the organ they asked him to fill in for me.

Some months later I received a phone call from my good friend Ray Dahrouge telling me of the tragic news.

“There But For The Grace Of God”

Local Band Shared A Goal With Danelectro:Hitting It Big 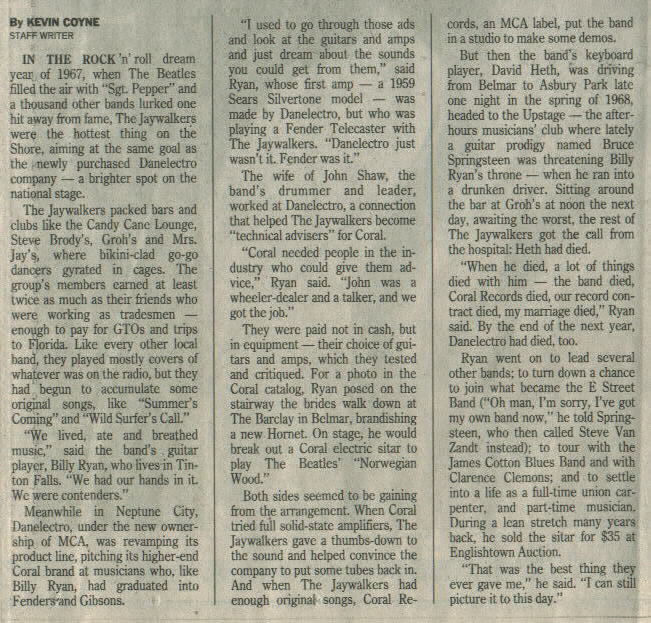 “I Finally Made It Big – Thanks Lord.

Through: The gracious and compasionate ministry of
Pastor John “Jack” Ludlam of First Baptist Church 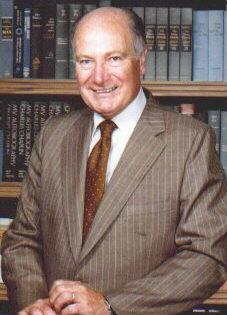 Mickey Holiday had something that drew “rock-lovers’ night after night. The JAYWALKERS and Mickey Holiday — this was the group that captivated the “now” crowd along the Jersey Shore. They had everything going for them — EVERYTHING but LIFE! The action was there — every kind, at any time. But not LIFE. And no one knew it better than Mickey himself. LIFE finally came when Mickey Holiday and Jesus Christ met on a person to person footing. When that happened, everything blasted loose. The endless groping for the “kick that counted” was jettisoned . . . New LIFE took over. Music and Mickey are as natural as breathing and air. There’d be no life apart from song . . . God had just made him that way. It had always been that way . . . as long as Mickey could remember. Only now that he has LIFE . . . Christ’s Life . . . the song is real! Just as real as all of living came to be. Mickey put it this way: “Hold on to Jesus — this world has proven untrue.” Those aren’t untried poetical jibberish . . . Mickey is crying out from way down deep, deep in the center of his new self: “One day I was wonderin’ ‘What’s it all about?’ ” In his new song . . . that splashes searching years: “I know where I’m goin’, and who I’m gonna see. I HAVE A FRIEND NAMED JESUS waiting there for me!” Here we have Mickey’s soul.